Description
A convenient way to store credits, or transfer between players. No offensive weapons, and makes a very expensive wall (not a suggested tactic).

The Vaultbox is an income socket unit. This unit generates credits for your team over time when placed on the battlefield. However, unlike a Moneymaker, the creditboxes do not give your team credits until they are recycled. While on the battlefield, the creditboxes gain 1% compounding interest every 10 seconds, or every 4 seconds while on a socket, essentially doubling in value every 5 minutes whilst on a socket.

The Vaultbox can be used following these steps:

For team games, lock boxes can be used to transfer credits between players, allowing more diverse tactics, and stronger teamwork abilities. Teammates can pick up and sell Vaultboxes you have built for credits to build units of their own. 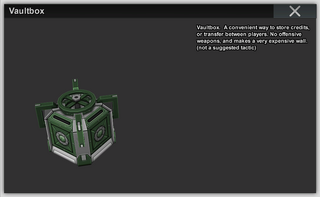 Vaultbox
Add a photo to this gallery
Retrieved from "https://airmech.fandom.com/wiki/Vaultbox?oldid=37884"
Community content is available under CC-BY-SA unless otherwise noted.