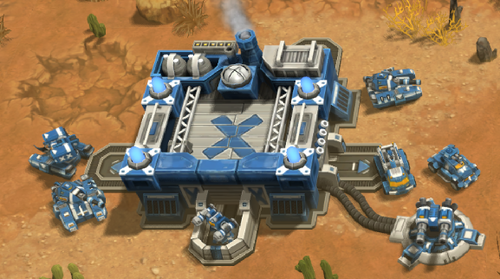 AirMech has a wide variety of units to construct with differing purposes, as well as a number of alternates, ultimates and Cosmetic Variants. Most units can be given order to capture outposts, attack the enemy fortress or patrol. Built units can be picked up at a fortress or friendly Outposts.

For more information about how to build and use units, see these pages on carrying, orders, and the HUD.

Compare the statistics of the different units with this spreadsheet.

All Infantry units attempt to capture Outposts, though a handful prioritize other tasks first, such as healing friendly units or destroying enemy units. Infantry are the only units that can enter and capture Outposts, filling the empty slot in each corner of the outpost until all slots are full and the outpost switches to friendly. If enemy infantry occupy any slots, friendly infantry will destroy them before entering. After all Outposts on the map are captured, Infantry advance toward the enemy's Fortress. Most infantry can take orders.

As a hidden stat, all infantry have a chance to dodge shots from tanks. If an infantry unit dodges a shot, the tank shot will simply miss the unit entirely, even if the infantry is standing completely still. This makes infantry useful as support when attacking tanks. This dodge change is lowered for the Butcher and Brute, and does not apply to infantry stationed or bunkered in outposts.

Vehicles are lighter and cheaper versions of tanks. They are used for quickly attacking Outposts in high amounts or at the back of a tank push. They have a chance to spawn infantry upon their death, so they can quickly take over a neutralised outpost.

Turrets are completely immobile, usually able to rotate, and can be placed on sockets to heal themselves and double their combat abilities. They have multiple uses, but usually specialise in destroying certain types of unit. They function when they are not on sockets, but receive bonuses when placed on one. For example: turrets cost no upkeep when placed on sockets (though they will cost upkeep if they are moved off-socket or the corresponding outpost is neutralised).

Artillery take time to acquire their targets via aiming while having a relatively high vision range. They fire splash damage shells that fly in an arc, but they cannot attack targets close to them. Like Turrets, artillery do not cost upkeep when placed on sockets.

The Support category holds a variety of different units that are used to support a tank line or AirMech. They aren't main units and have more specialised roles, but are still very important.

Anti-Air are used to deter AirMechs in ground and air form. They range from missiles to instant fire, and can be mobile or stationary.

Healing units that repair nearby units and disarm mines.

Support units that "hide" nearby units on the radar.

Mines cannot move and may be disarmed by healing units and Roller. Light Mines and Heavy Mines have an arm time that is reset if a unit collides with them before the arm time is completed. In contrast, Stasis Mines and Bear Traps do not have an arm time.

Socket Units only function while on a friendly pad. They give bonuses to you and your teammates, such as increased income, or unit cap.

Credit boxes generate interest when placed on the ground, and may be placed on a pad to enable health regeneration and faster interest generation . Income is not automatically acquired, instead a player must pick the box up and sell it, which will give the player the normal selling price plus interest, depending on how long it was on the field. Can also be used to transfer credits between teammates or as an expensive wall.

Supportive flying units have no offensive capabilities, instead giving buffs to your units, such as healing or radar.

Offensive flying units do damage to the enemy AirMech and units in the area.

Guardians are your own personal assistant in AirMech that orbit around you. Each provides one special benefit, albeit not a huge boost. To equit a guardian in-game, you need to build them and just deploy it, no matter where you are on the map guardian will be in your mech. You can equip a maximum of 4.

Ultimate units are cosmetic reskins of regular units, some of them grant a permanent XP/kudo boost to their owner.

In AirMech Wastelands, these units are much stronger than their regular variants.

Unit variants are simply reskins of normal units. This is purely cosmetic and does not affect gameplay.

Some of these units have altered statistics in Wastelands.

Unit Alternates can be currently only be crafted using the nanoforge, they are permanent variants. Unit Alternates that have been found in the old drop system have limited uses.

These units can not be bought from the shop, but could be found after any game as a result of the random drop system in stacks of 3 or 5 depending on unit type. Players may buy additional stacks for kudos or unlock it permanently for 270 Diamonds. Stacked items consume a (1) count each time they are used in a completed game, online or offline.

These units have altered statistics in Wastelands, but are treated like regular units in Strike.

Aggressor units have weaker armour but a stronger attack. They go slower but have a farther range.

Cheap units are, well, cheaper to make. They have less armour and attack power, but are very economical.

Fine units are stronger and work better, but are expensive and take longer to build.

Heavy units are strong and have good armour, but weigh more and take longer to build.

These units appear on survival or as neutrals, they are unusable unless abducted with a Saucer or resurrected using a Necro. They cannot be commanded after they are acquired. When recycled they give 0 credits.

Void units are buffed versions of certain units that only appear in specific Warzones. They are unusable unless abducted by a Saucer or resurrected by a Necro. When picked up by an Airmech they display a blank icon. Currently all void units share the description "This unit has been modified using VOID Technology".

Hero.png
Add a photo to this gallery
Retrieved from "https://airmech.fandom.com/wiki/Units?oldid=38069"
Community content is available under CC-BY-SA unless otherwise noted.