Description
Upgraded version of the regular Heavy Anti-AirMech Turret. Features two additional Turret pods for maximum carnage. Your AirMech will pretty much look like Swiss Cheese after flying through a group of these bad boys.

The HAAT is the strongest Anti-Air unit in the game. It fires rounds of bullets that quickly destroy any mechs flying around in the area. It is perfect for keeping mechs away from heavily defended areas and outposts, especially when placed on a socket.

The HAAT, like other Anti-Air units, fires in bursts and then reloads. It only does 50% of its damage to AirMechs on the ground. 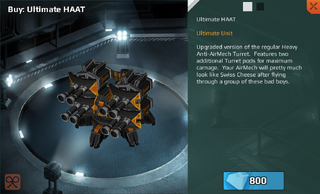 Ultimate HAAT
Add a photo to this gallery
Retrieved from "https://airmech.fandom.com/wiki/Ultimate_HAAT?oldid=33345"
Community content is available under CC-BY-SA unless otherwise noted.