Each player starts with a single outpost on this map. They have four pads by their fortress and another by their outpost.  There are three neutral outposts, one at the top and two at the bottom.  The top outpost is a Power Plant with two pads while the bottom outposts are standard outposts each with a single pad.

The standard opening on this map for 1v1 is to start off with tanks (and healing units) and immediately head to the closest bottom outpost.  After that, players generally turtle up at the bottom outposts.  The top outpost is normally ignored in 1v1 scenarios.

In team games, at least one player usually rushes for bottom as in a 1v1 while another teammate may head to the top outpost instead.  Most of the focus is usually around the bottom outposts but smaller fights (especially involving artillery) occasionally happen at the top, especially in 3v3 scenarios.

In Co-Op games the omniscient AI tries to cheese the human outpost, unless there is massive defence in place. 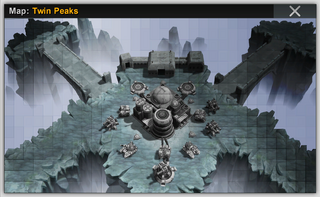 Twin Peaks Map
Add a photo to this gallery
Retrieved from "https://airmech.fandom.com/wiki/Twin_Peaks?oldid=28214"
Community content is available under CC-BY-SA unless otherwise noted.