Description
Light turret which can attack ground targets. They are quick to build as a trade off for damage and health.
Good against light infantry and vehicles, but weak against tanks and Airmechs.

The T45 is the basic Turret unit. It is a small and versatile Turret that can quickly burst down light units and infantry. Its somewhat low DPS and low health makes it ineffective against heavier tanks and turrets. It is a great defensive unit for quickly responding to enemy attacks.

The T45 Fires 4 shells per burst at ground units. This number is increased by 50% if the T45 is placed on a socket, allowing it to destroy a Longhorn by itself.

The T45 is often used as a drop defender. Due to it's rapid 3 second build time, it is faster to build than any Light Unit excluding Zipper. Its fast build rate yet surprisingly resilient armor can make it a great wall against enemy pushes, or a great defensive unit to defend against harassment. Build T45s in a pinch if an enemy is attacking your outpost and you don't have any units that can build fast enough. 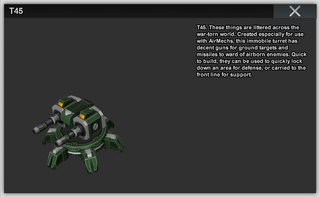 T45
Add a photo to this gallery
Retrieved from "https://airmech.fandom.com/wiki/T45?oldid=38029"
Community content is available under CC-BY-SA unless otherwise noted.