The Swift Rebel makes a direct trade of more build time in exchange for greater move speed. While they may take longer to build, once they are on the field they can quickly get to their destination, giving the enemy less time to react.

The Swift Rebel is a light vehicle unit similar to the Jackal. It's main purpose is to neutralize outposts, destroy infantry and distract tank fire. It has respectable health and damage which makes it great for pushing into enemy outposts. The Rebel does more damage than the Jackal, but it costs more to build, has a slower move speed and can only target ground units.

Light, versatile units armed with high power weapons with minimal armor penetration. The tanks themselves are protected with moderately heavy armor, making them ideal damage fodder against other units with low armor penetration.

The Rebel is generally reliable in large numbers against Outposts but they are easy to destroy which makes them poor defensive units. The only exceptions are when Rebels are in squads of at least ten, or when they are fighting infantry, Zippers, Jokers, Jackals, and other lightly armored units. 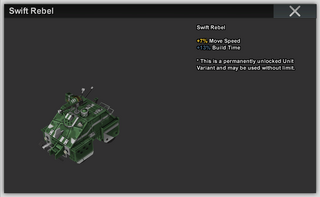 Swift Rebel
Add a photo to this gallery
Retrieved from "https://airmech.fandom.com/wiki/Swift_Rebel?oldid=33319"
Community content is available under CC-BY-SA unless otherwise noted.