Pilots can be used to aid the player as a co-op partner in Wastelands, although originally used in Strike. Most pilots, except the Ultimate and Promotional Pilots, can be bought with Kudos. Each Pilot provides specific bonuses to in-game stats and out-of-game stats. Each pilot also has its own negative statistics to balance their advantages out.

In Wastelands, they will pilot their own AirMech, build units and fight by your side. Depending on the personality assigned to them they will build different units, fight in different styles and use different strategies.

As players complete their training, more regular pilots will be available to unlock from their Pilot Quests. These pilots are:

Ultimate Pilots are always available via Shop, albeit for Diamonds rather than Kudos like regular pilots. currently unavailable for purchase.

Ultimate Pilots can not be used in matchmaking PvP or Custom games that have ultimates disabled. They may be used in Solo, Coop, PvE and any Custom matches that allow it. Games that allow Ultimates are indicated by a flashing circled "U" at the top.

Any attempt to use Ultimates (including units) where not allowed will cause the Ultimates to temporarily revert to regular variants, because Ultimate Pilots provide very high stat bonuses to all aspects of in-game and off-game play.

The following is a list of ultimate pilots in the game:

These Pilots are/were available either as part of a Seasonal Event, or as part of a Promotional Giveaway (Albums, Packs). Unlike Regular Pilots, they do not need a Level Requirement in order to be used. Exclusive Pilots have stat bonuses, such as existing Pilots.

Pilots designed exlusive for players who have 500 referrals reached level 10.

Front Line Assembly Pilots are available via Steam Shop (or Amazon) for currency with the purchase of FLA's original AirMech Music Album as additional Promotional items.

Event Pilots are available via Shop for Kudos only during the time period of related Event/Seasonal; some of them may require the player to have achieved a certain level.

Developer Pilots are special and are not available via Shop except Ken for early Alpha Testers with Kudos. They're to honor and for developer's themselves with no particular stat boost except being rare and unique. The Pilots listed below were most likely removed from final game code after the game left Alpha.

These Pilots were unlocked in the short Warzone campaign which has been removed from Strike to form the framework for Wastelands.

These Pilots have a great possibility of entering the hangar of AirMech. Whether it is a Regular, Ultimate, or Exclusive, it might be nice to keep an eye out for these New and possibly Upcoming Pilots. 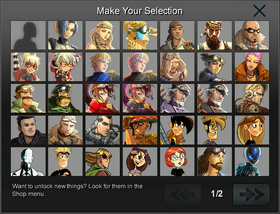 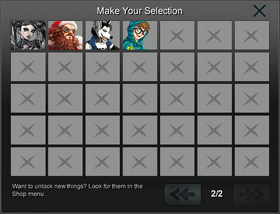 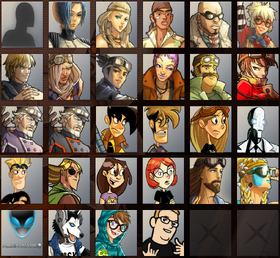 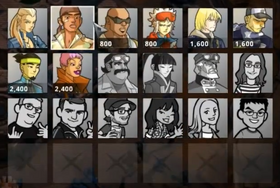