Description
Rise from your grave! This little guy can actually resurrect destroyed units.
It can be assigned orders if needed.

The Necro is an infantry that can resurrect dead units, friendly or enemy, from the salvage left on the battlefield. It is great for dropping around a heavily contested outpost to quickly replace your army. Be aware that after a successful resurrection the Necro will self-destruct.

A mad scientist in Robot form, Necro can completely revive a fallen unit to continue fighting for you, making it quite a useful asset if guarded properly.

Upon sighting a wreck of a Vehicle that once was, Necro will begin shooting a special revive beam at it, similar to how Regular Healing units can salvage credits from vehicle wrecks, except Necro isn't simply salvaging the wreck, he plans to bring the entire unit back to life again! Rebuilding an entire tank does a number on his circuitboards and power systems, however, so after rebuilding any of a single unit, Necro will lose power, fall over, and self-destruct, limiting its use to reviving one unit. Keep in mind, however, using multiple Necros on one wreck will speed up the process, and only one Necro will self-destruct when the revival is complete.

Necro shows its stripes following Pushes, reviving fallen tanks, allied or enemy, to continue the fight. Make sure to scout for Artillery, keep light units away, and keep mechs occupied when using Necros, because, as stated, they're quite weak and vulnerable.

A good defense can destroy a great many of the enemy's units. If a defense is successful, and the enemy is forced to withdraw, place down Necros to rebuild your defensive line, and to refurbish the tanks that the enemy has thrown at you to get a massive one-up against the enemy the next time around. 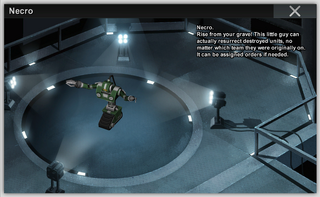 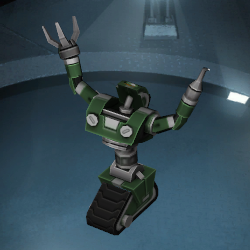 Success!
Add a photo to this gallery
Retrieved from "https://airmech.fandom.com/wiki/Necro?oldid=37202"
Community content is available under CC-BY-SA unless otherwise noted.