Description
Years were spent designing a bot with rapid twitch motors able to jump over obstacles and on top of targets. In the end the solution was quite crude and simple--the rocket-jump! It's not very precise, but it quickly gets the bot out of harms way, so they called it good enough and moved onto the next project. It can be assigned orders if needed.

The Jumper is a unique infantry that can jump to avoid enemy fire. It is a strong and expensive infantry, but excels at surviving for extended periods of time while heading towards enemy outposts.

The Jumper is a mix between a SAM and a Morty, with heavy hitting rockets and some versatility as well. 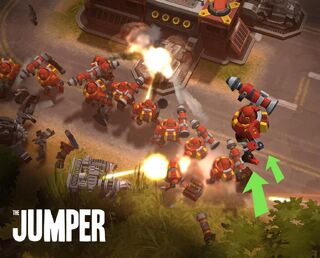 Jumper
Add a photo to this gallery
Retrieved from "https://airmech.fandom.com/wiki/Jumper?oldid=37250"
Community content is available under CC-BY-SA unless otherwise noted.