Description
Anti-ground rockets hidden in an ice cream truck! Wait a minute, this is just Bucky, isn't it? Now Bucky's armor all of a sudden makes sense! The truth has come out at last.

The Ice Cream Buck is a cosmetic variant of the Bucky that does not affect gameplay.

The Bucky is a long range rocket vehicle that resembles a HIMARS (MLRS). The Bucky is versatile with high speed and offensive power, its ability to target ground targets, and low cost. Its main drawbacks are its weak armor and its slow rockets that do not follow their target and occasionally miss versus stationary foes, making them unsuited for combat against fast units (such as the Zipper and Tango) or AirMechs.

Their good weapons can also supplement regular tank armies as damage fodder. Like Jackals, Buckies are cheap and quick to make, but unlike Jackals, Buckies carry powerful weapons, making Bucky a good choice as a distraction unit for tank armies; place them at the front and sides of your army to make enemy units attack them first, ignoring your more expensive tanks. The powerful weapons on the Bucky will allow you to hold a higher damage output than with Jackals, but with the same cheap distraction effects. Also, Buckies have a reduced 40% damage vs the fortress.

Buckies also have a very long range, 26. Tanks have a mere 20 range, and turrets, 22. Exploit this advantage by making buckies work like anti-tank sniper units, being able to hit enemy tank lines from afar, without receiving any damage in return. Be careful , however, as Buckies have very weak armor, making them easy targets for a defending Airmech; supplement your Bucky Sniper lines with anti-Air. The long range of Bucky can make it a cheap and effective alternative to artillery because Bucky Missiles cannot be jammed by Jammer. However, be nullified if the enemy packs an Aegis.

While Buckies are great at providing supporting fire from a distance, at longer ranges, they can be inaccurate. The closer they are to their target, the higher the chance that missiles will hit the enemy will be. Keep this in mind when selecting Buckies. 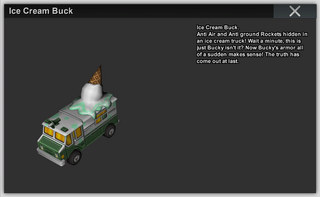 Ice Cream Buck
Add a photo to this gallery
Retrieved from "https://airmech.fandom.com/wiki/Ice_Cream_Buck?oldid=35903"
Community content is available under CC-BY-SA unless otherwise noted.