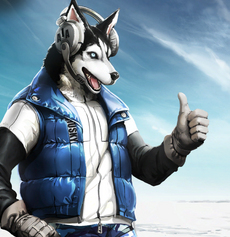 Samson
Bill
ChimneySwift
Description
Husky. In staying true to his Real Time Strategy roots, Husky focuses on increasing the durability of his ground forces in exchange for AirMech viability. http://youtube.com/HuskyStarcraft

This Pilot was created as a reward of HuskyStarcraft for 500 Referrals that reached Level 10. Husky is a well known Starcraft 2 caster on Youtube, with a considerable number of following loyal Husketeers.

Husky is a unit-centric Pilot like Samson. He improves his team's unit's armor and DPS for 8% each. His own Mech is weaker and does less damage, so he's best played with Osprey to heal units while they are dealing damage. 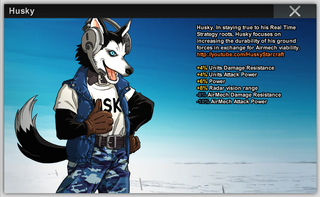 Previous Husky
Add a photo to this gallery
Retrieved from "https://airmech.fandom.com/wiki/Husky?oldid=35296"
Community content is available under CC-BY-SA unless otherwise noted.