Availability: Available during the American Super Bowl. Also via VIP Shop and Crate 2 (8% chance) though this is a retired drop so only rarely available via Player Market. 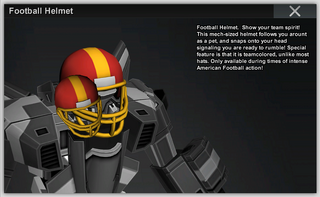 Football Helmet
Add a photo to this gallery
Retrieved from "https://airmech.fandom.com/wiki/Football_Helmet?oldid=30418"
Community content is available under CC-BY-SA unless otherwise noted.