Description
Penny Arcade Exclusive! Infantry unit with a very effective close combat attack. Was extremely effective at dealing with humans during the Great War, somewhat less effective on robots in use today, though good armor keeps it in service.

The FF2000 is a melee infantry, and is an Infantry killer. A few FF2000s can destroy a SAM rush easily. However, they cannot be bunkered and are unreliable for capturing outposts.

FF2000 was originally only obtainable from a PAX Prime 2012 PAX Promotional Code Card handed out by Carbon at their booth at PAX conference in Seattle August 31 to September 2, 2012. Now it's available via PAX Crate with a 7% change to drop, and the VIP Shop.

FF2000 attacks enemy unit, AirMechs, and fortresses, but is unable to damage outposts. 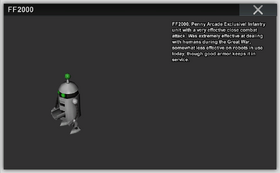 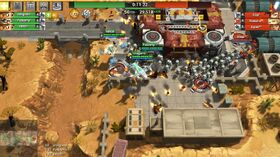 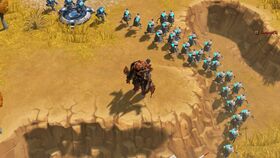 FF2000 Charge
Add a photo to this gallery
Retrieved from "https://airmech.fandom.com/wiki/FF2000?oldid=37472"
Community content is available under CC-BY-SA unless otherwise noted.