Description
Is covert operation more your style? These bots can stealth to avoid detection.They are strong against socketed units and neutralizing undefended outposts. It can be assigned orders if needed.

The Assassin is a stealth melee infantry that cloaks and remains invisible to the enemy until it is in range of an enemy unit and strikes. It has a high damage output and excels at getting behind enemy lines before being killed. Unlike its Butcher counterpart, the Assasin has low HP, but can quickly be replaced. It will prioritize killing enemy units before entering an outpost.

Assassins can be used as shock troopers as they can cloak to avoid detection from other units while they sneak into a empty outpost. They have a fast move speed so they can run up to an enemy unit before it has time to react. The Assassin works best when it is dropped behind a unit and supported with Mech fire, or if it is sent across the map on a stealth mission. 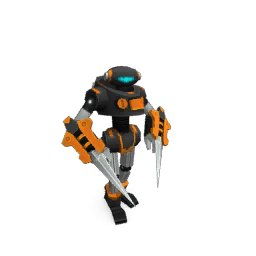 Assassin
Add a photo to this gallery
Retrieved from "https://airmech.fandom.com/wiki/Assassin?oldid=36980"
Community content is available under CC-BY-SA unless otherwise noted.